This week, we at Bourse conclude our two-part series leading up to the Trinidad & Tobago budget for FY2017/2018. Having reviewed last week the trends in government revenue, largely a factor of lower contributions from the energy sector, we turn to the expenditure side of the budget equation. Finally, we consider the possible options available to the Government to address what is likely to be a deficit budget in the coming fiscal year. 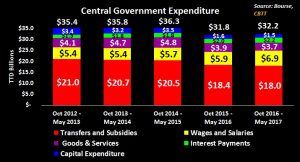 Based on the most recent data made available from the Central Bank of Trinidad & Tobago (CBTT), Government Expenditure totalled $32.2B for the period October 2016 to May 2017. This represents a marginal increase of 1.8% ($0.4B) when compared to the same period in 2015/2016, in which expenditure totalled $31.8B. 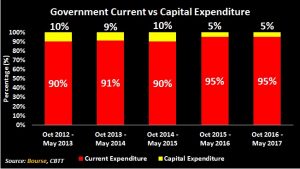 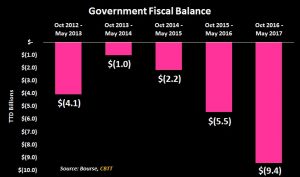 Notable declines in Government Revenue, coupled with less-than-proportionate changes in Government Expenditure, has led to a widening Fiscal Deficit over time. From October 2013 – May 2014, Government Fiscal Balance stood at -$1.0B. This has since increased to -$9.4B for the same period in 2016 – 2017.

With a high likelihood of a fiscal deficit being on the cards for fiscal 2017/2018, initiatives to either reduce the size of the recurrent deficit and/or close the fiscal gap may be pursued. Some of these initiatives could include (i) reducing government expenditure, (ii) increasing government borrowing, (iii) drawing on national savings and (iv) sales of assets.

With respect to Transfers and Subsidies (accounting for more than half of government expenditure), the Honourable Minister of Finance, in the 2017 Mid-Year Budget Review, reiterated the Government’s intention to remove the fuel subsidy by 2018, thereby allowing the price of fuel to fluctuate based on global energy prices.

Such a move, however, would shift costs onto consumers and businesses, with possible inflationary effects.

The Government may also consider adjustments to water and electricity rates in an effort to control Transfers and Subsidies. Investors may be aware that the Regulated Industries Commission has begun a review process into the Trinidad and Tobago Electricity Commission (T&TEC) and the Water and Sewage Authority (WASA). Given that the last rate increase for WASA was in 1993 and T&TEC was 2006, it may be a question of by how much and when rather than if rates will increase, in an effort to rationalize Government expenditure. 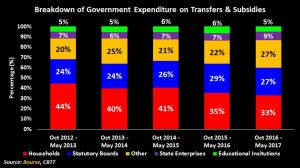 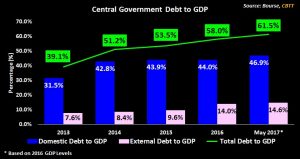 With prior guidance from the Honourable Minister of Finance in the 2016/17 budget statement  of a 65% total debt to GDP ‘ceiling’,  there remains additional estimated capacity for borrowing of TT$ 5.1B (holding 2016 GDP figures constant). Were the government of Trinidad & Tobago to issue bonds in the domestic market, a 10-year domestic bond might be issued at a yield of 4.37%, in line with the current 10-year TT treasury yield (holding all other factors constant). The government could also look to international markets, with the estimated yield on a 10-year, USD Trinidad & Tobago Government bond being in the range of 4.0% – 4.6%. T&T currently has an investment grade rating by credit rating agency S&P (BBB+) and a non-investment grade rating by Moody’s  (Ba1). However, T&T’s credit rating could likely remain under pressure from factors such as low commodity prices and energy production levels, as well as the possible refinancing approaches to state-owned Petrotrin’s US$850M bonds due in 2019. %.

Further drawdowns from the Heritage and Stabilization Fund (HSF) could address some of the fiscal deficit in the short-term. This would follow previous withdrawals of US$ 375M in May 2016, as well as the most recent US$ 251M in March 2017. According to data from the Ministry of Finance, the HSF balance as at June 2017 stood at US$ 5.62B. With strong portfolio performance in recent periods, this strategy remains a viable one. Should the fortunes of the HSF’s portfolio – dependent on the direction of international equity and bond markets – change, however, the periodic withdrawal strategy would warrant review. 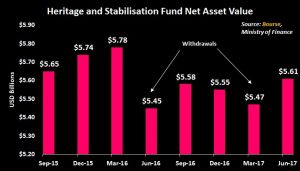 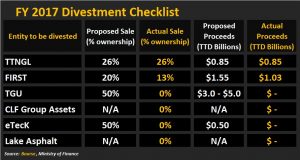 As mentioned in last week’s article, only some of the divestment initiatives that were proposed in the 2016/2017 Budget actually materialized. State owned assets such as TGU, eTeck, Lake Asphalt and CLF Group assets remain on the cards as potential sources of (one-off) revenues which can aid in closing the fiscal gap.

Investors may recall that the Honourable Minister of Finance noted that several assets owned by the CLF Group are still available to settle debt owed to the Government. These include Republic Financial Holdings Limited (RFHL), Angostura Holdings Limited (AHL) and One Caribbean Media Limited (OCM), all of which are listed on the Trinidad and Tobago Stock Exchange. These listed stocks could potentially generate up to $6.74 billion at current market prices. However, it is likely that sale of such significant positions of stock would have to be undertaken at a discount to the current market price, especially if the sale is to raise the intended funds in a relatively short space of time. 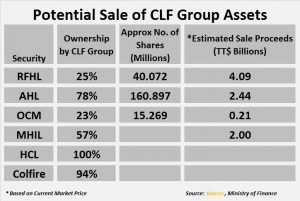 In light of lower revenues, the Government may focus on a combination of expenditure reduction, borrowing, asset sales and drawing on savings in order to fund the potential fiscal gap in the upcoming 2017/2018 Budget. In the longer-term however, important decisions would need to be made in terms of the timing and magnitude of adjustments to recurrent revenue sources and uses of expenditure.