This week, we at Bourse take a look at the financial performance of two major conglomerates listed on the Trinidad and Tobago Stock Exchange, Massy Holdings Limited (MASSY) and Ansa McAl Limited (AMCL). Despite a decline in Revenue, MASSY’s overall performance improved due to cost containment and one-off gains from the divestment of its security business operations. Conversely, costs associated with AMCL’s acquisition and restructuring efforts would have offset the impact of its top line growth.

MASSY’s Third Party Revenue experienced a minimal 0.8% decline compared to the 9M 2018 comparable figure after recording moderate growth in the three previous 9M periods. The Automotive & Industrial Equipment business unit (BU) contributed the most to the YoY decline, falling 5.4% or $106.2M as slowing new vehicle sales in Trinidad and Tobago would have inhibited growth. This was closely followed by the Integrated Retail BU, which generated $73.7M less in Third-party Revenue YoY. On the other hand, despite lost revenue from the closure of the Petrotrin Refinery, the Energy and Industrial Gases BU has shown healthy growth of 7.5% YoY. The Financial Services BU has been the only unit to show consistent revenue improvement over the last four comparable periods, having grown 28.0% cumulatively but has, on average, accounted for less than 5% of total Third Party Revenue during the same period.

The Group would have seen a 6.7% decline in PBT from the Integrated Retail BU – from $265.4M to $247.7M – on account of the constrained economic conditions which persist, particularly in the Trinidad & Tobago and Barbados operations. Conversely, despite lower revenue generated, the Automotive & Industrial Equipment segment’s PBT climbed 6.3% YoY. According to the Chairman, the Energy and Industrial Gases BU would have incurred one-time severance charges related to Massy Energy Fabric Maintenance, limiting PBT growth to 1.4% YoY. This segment is likely to experience further improvements in growth upon the operationalization of the methanol and dimethyl ether plant in which MASSY has a 10% stake.

During the period, the Group would have divested its interest in G4S Holdings (Trinidad) Ltd., G4S Barbados and Massy Security Guyana, thereby exiting the security and guarding business altogether. The one-off gains resulting from these transactions would have been filtered into this period’s results. 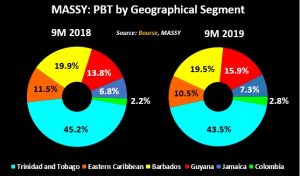 While subdued growth in the domestic and Barbados markets continue to impede profitability, the Group has begun to reap the benefits of its exposure to the Guyanese, Colombian and Jamaican markets. PBT generated from Colombia grew from $16.0M to $20.9M (+29.9% YoY). PBT from Guyana improved 15.8%, from $102.2M in 9M 2018 to $118.3M in 9M 2019 and now accounts for 15.9% of total PBT compared to 13.8% in the prior period. This exposure may bode well for MASSY’s future performance considering Guyana’s GDP growth projections of well over 20% between 2019 to 2021. 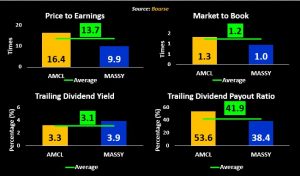 At a current price of $54.95, MASSY’s share price has appreciated 16.9% YTD and trades at a trailing price to earnings ratio of 9.9 times, well below the Conglomerate sector average of 13.7 times. The stock offers investors a trailing dividend yield of 3.9%, also above the sector average of 3.1%. Given MASSY’s strategic expansion into growing markets, improvements in profitability and attractive valuations, Bourse maintains a BUY rating on MASSY. 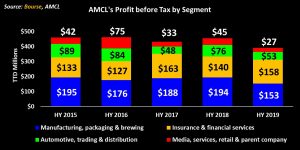 During the period, AMCL would have completed two strategic acquisitions, the costs of which would have been included in the results, dampening profitability. The Group acquired a 94.17% stake in clay block manufacturer, Trinidad Aggregate Products for $53M, assuming operating control in Q1 2019. AMCL acquired a 50% interest in Tilawind S.A., a 21 megawatt wind farm in Costa Rica at a cost of $44M, which represents the Group’s entry into the alternative/renewable energy business. Performance for the period was also affected by the commissioning of a new furnace at Carib Glass ($150M) and program of restructuring which resulted in $25.0M of non-recurring costs. These initiatives are expected to better the position the Group for improved profitability and growth going forward. 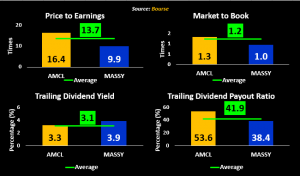 At a current price of $55.20, AMCL trades at a trailing P/E of 16.4 times, above the Conglomerate sector average of 13.7 times but below its three-year average of 17.2 times. The stock offers investors a trailing dividend yield of 3.3%, above the sector average of 3.1%. On the basis of muted profitability and relatively high valuations, but tempered by the possibility for improvements resulting from ongoing restructuring and acquisition activity, Bourse maintains a NEUTRAL rating on AMCL.