This week, we at Bourse review the six-month results for the period ended June 2017 for Sagicor Financial Corporation Limited (SFC) and provide investors with an update on the Clico Investment Fund (CIF). SFC recorded growth in earnings over the period, with its share price advancing 7.4% year to date. The unit price of CIF, on the other hand, has slipped 8.5% year-to-date, with much of the decline taking place in the recent few weeks.

Sagicor Financial Corporation (SFC) reported diluted Earnings per Share (EPS) of TT$0.41 for the six month period ended on June 2017, an improvement of 22% compared to the EPS of TT$0.34 reported for the corresponding period last year. Excluding results from discontinued operations in the prior period, EPS improved 35.6% over the comparable period.

With improvements in its Sagicor Jamaica (TT$72M) and the Head Office operations (TT$85M), SFC reported higher Net Income from Continuing Operations despite the decline in net income from Sagicor Life (TT$51M). Income from the Sagicor Life segment fell 27.4% year-on-year to TT$135M in HY 2017. 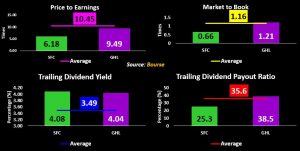 At a current price of $8.30, SFC trades at a trailing P/E of 6.18 times, below the Non-Banking Finance sector average of 10.45 times (exclusive of NEL). SFC offers investors a relatively attractive trailing dividend yield of 4.1%, higher than the sector average of 3.5%. Based on attractive valuations and improving financial performance, Bourse maintains a BUY rating on SFC.

Investors would have noticed the sudden decline in the unit price of CLICO Investment Fund (CIF) in recent weeks, which have raised some concerns. One possible explanation for this decline could be the recent rumblings between the shareholders of CLICO and the Government, as both parties battle for control of the fate of CLICO’s assets.

Initially, 70% of CIF was comprised of Republic Financial Holdings Limited (RFHL) shares, with the remaining assets comprised of Government bonds with a coupon rate of 4.25%. Provision was made for the possibility of CIF comprising of 100% of RFHL shares. The objective of CIF is to hold these assets until the redemption date (January 2nd, 2023). Upon redemption, the Government shall distribute the RFHL shares and other assets in CIF to the unitholders.

As at June 2017, 86% of the assets in CIF was comprised of RFHL shares. Consequently, the performance of RFHL is likely to have a significant impact on the Net Asset Value (NAV) of CIF.

Within the space of 23 trading days, the traded price of CIF moved from $22.39 to $20.70 (down 7.5%). The fall in CIF’s price would have coincided with news of CL Financial shareholders and the Government jostling for control of the beleaguered Group’s assets. While this headline noise is likely to have stirred investor confidence, the underlying assets in the CIF have remained relatively stable.  For the nine month period ended June 2017, RFHL recorded Earnings per Share of $5.93, an improvement of 5.7% from the comparable period in 2016. RFHL’s dividend payments have remained constant. The dividends received by CIF from RFHL contribute to the total income generated by the Fund. In turn, at least 95% of this income is to be distributed to CIF unitholders. 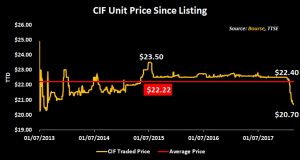 Prior to this rapid decline, CIF’s price has traded within a relatively narrow range of $22.31 to $22.80 for the last two years. CIF’s traded price of $20.70 represents a 9.9% discount to its estimated NAV $22.97. The traded price stands at its 4 year low, and has not traded below $20.70 since February 2013. Additionally, CIF has not traded at this magnitude of a discount to its NAV since April 2016. CIF’s trailing dividend yield of 4.73% is the third highest on the market. 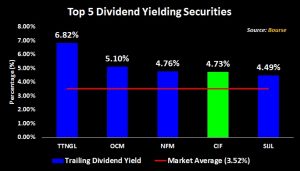 On the basis of a significant discount to its NAV, relative stability in the value and cash flows from the assets in the Fund and an attractive dividend yield, Bourse maintains a BUY rating on CIF.