This week, we at Bourse review the full financial year performance ended September 2019 of banking giant NCB Financial Group Limited (NCBFG) and half year (HY) results of Non-Banking Finance stock JMMB Group Limited (JMMBGL). Both groups would have reported overall increased earnings. However, NCBFG’s performance would have been helped by several one-off transactions. We take a closer look at the results below. 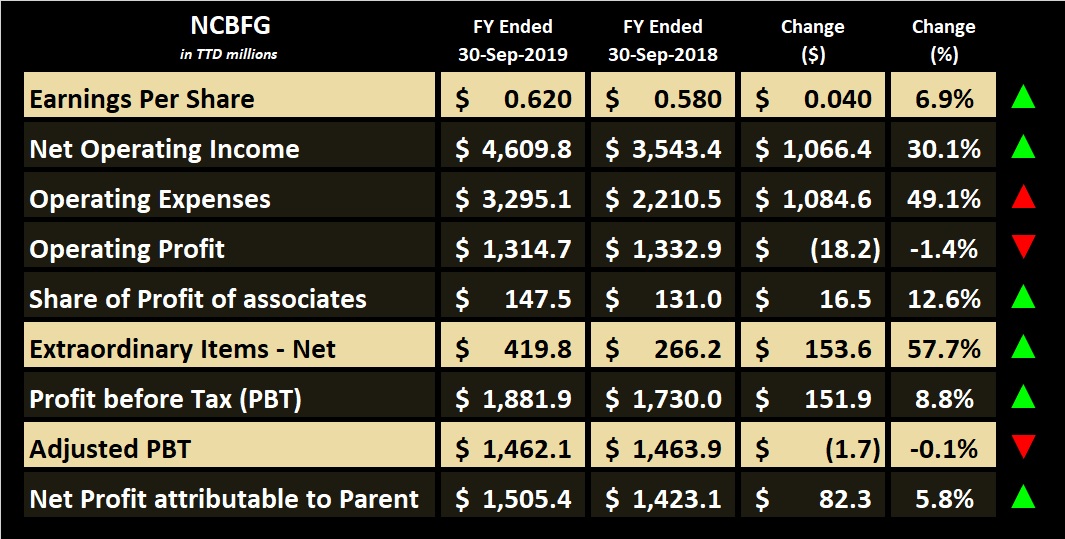 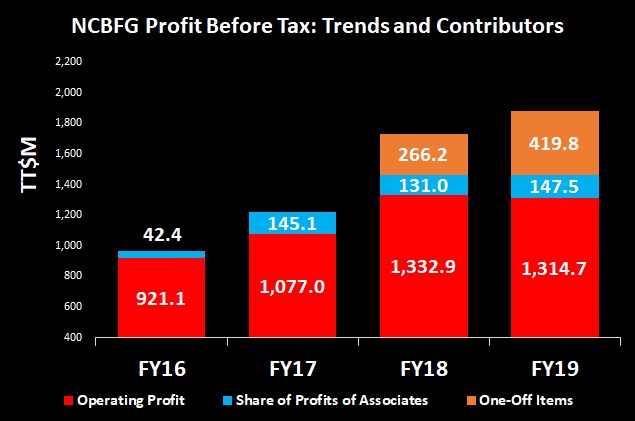 NCBFG’s Profit Before Taxes (PBT) have shown consistent growth over the past four comparable periods, from FY2016 to FY2019. Breaking PBT into Operating Profit, Share of Profit from Associates and ‘One-Off’ Gains, some trends emerge.
In the case of Operating Profit, FY2019 figures have been flat relative to FY2018, despite the acquisition of GHL. Growth in Operating Income would have been more than offset by an increase in Operating Expenses. NCBFG’s ability to rein in costs, if possible, could be an important factor in future improvements in profitability.
Share of Profit from Associates has been fairly stable from FY2017 to FY2019, ranging from TT$131M to TT$147.5M. The wildcard for investors in NCBFG’s earnings has been extraordinary one-off items in recent years. Earnings from one-off events would have accounted for approximately TT$266.2M and TT$419.8M (or 15.4% and 22.3%) of PBT in FY2018 and FY2019 respectively.
NCBFG’s ability to fully ‘digest’ its latest acquisitions, manage financial leverage and achieve sales and cost synergies will all play a key role in improving the Group’s financial performance.

At a current price of TT$10.85, NCBFG trades at a trailing P/E of 18.6 times, above the Banking sector average of 16.2 times also above its 3-year average P/E of 10.5 times. NCBFG offers investors a trailing dividend yield of 1.6%, below the sector average of 3.9%, though its dividend payout ratio is less than half the sector average. On the basis of fairly muted PBT growth (adjusted for one-off items), above average valuations and a relatively low dividend yield, Bourse maintains a NEUTRAL rating on NCBFG. 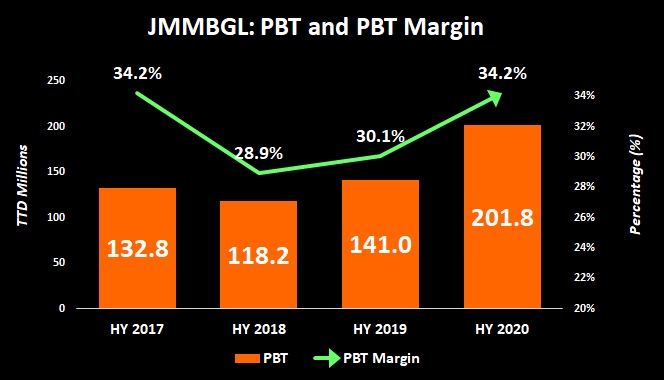 Group Profit Before Tax (PBT) for JMMBGL has trended upward over the past three comparable periods, growing from TT$118.2M at HY2018 to its current HY2020 TT$201.8M level. The Group continues to grow both through organic and inorganic sources. Its most prominent recent growth driver will be the acquisition of a 22.6% stake in ‘New Sagicor’ which is set to list on the Toronto Stock Exchange. To partially fund this purchase, JMMBGL would have recently concluded the largest Additional Public Offering (APO) in Jamaica, with the potential to issue up to 325 million new shares raising as much as US$92.8M equivalent in new capital. Results of the APO are expected by November 25th, which is anticipated to be strong given the earlier than scheduled closure.

At a current price of $2.27, JMMBGL trades at a trailing P/E of 17.2 times, considerably higher than the Non-Banking Finance sector average of 12.5 times and offers a trailing dividend yield of 1.0%, below the sector average of 3.1%. On the basis of strong PBT growth, but tempered by above average valuations, a low dividend yield and an evolving capital structure, Bourse maintains a NEUTRAL rating on JMMBGL.

For more information on these and other investment themes, please contact Bourse Securities Limited, at 226-8773 or email us at invest@boursefinancial.com.
“This document has been prepared by Bourse Securities Limited, (“Bourse”), for information purposes only. The production of this publication is not to in any way establish an offer or solicit for the subscription, purchase or sale of any of the securities stated herein to US persons or to contradict any laws of jurisdictions which would interpret our research to be an offer. Any trade in securities recommended herein is done subject to the fact that Bourse, its subsidiaries and/or affiliates have or may have specific or potential conflicts of interest in respect of the security or the issuer of the security, including those arising from (i) trading or dealing in certain securities and acting as an investment advisor; (ii) holding of securities of the issuer as beneficial owner; (iii) having benefitted, benefitting or to benefit from compensation arrangements; (iv) acting as underwriter in any distribution of securities of the issuer in the three years immediately preceding this document; or (v) having direct or indirect financial or other interest in the security or the issuer of the security. Investors are advised accordingly. Neither Bourse nor any of its subsidiaries, affiliates directors, officers, employees, representatives or agents, accepts any liability whatsoever for any direct, indirect or consequential losses arising from the use of this document or its contents or reliance on the information contained herein. Bourse does not guarantee the accuracy or completeness of the information in this document, which may have been obtained from or is based upon trade and statistical services or other third party sources. The information in this document is not intended to predict actual results and no assurances are given with respect thereto.”