This week, we review the performance of Massy Holdings Limited (MASSY) and Agostini’s Limited (AGL) for the first quarter ended 31st December, 2020. Both MASSY and AGL reported improved performance even as pandemic conditions continued. Will both groups continue to prosper under testing conditions, or is the current performance transient? We discuss below.

MASSY’s overall PBT expanded by 12.8% for the period under review. Despite a marginal 0.7% increase in Revenue, PBT from the Integrated Retail segment (43.1% of PBT) grew 19.3% YoY on account of improving operating margins.

Gas Products, 20.0% of PBT, contracted by 12.2%, primarily affected by an 81.5% decline in its Share of Results of Associates and Joint Ventures – influenced by turnaround expenses in Caribbean Industrial Gases Unlimited (CIG) – outweighing its 2.8% increase in Revenue.

MASSY’s Motors & Machines, which accounted for 15.7% of PBT in Q1 2021, is spread across three jurisdictions: Trinidad and Tobago (T&T), Colombia and Guyana. In FY2020, T&T accounted for an estimated 49% of Revenue with Colombia comprising 44% and Guyana the remaining 7%.  According to Central Bank data, T&T has shown signs of stabilizing demand for new motor vehicles in the last quarter of 2020 and an increase in construction activities which may have spurred demand for machinery. In Colombia, MASSY is an exclusive dealer of Mazda and Mercedes Benz and also maintains dealerships for brands including Kia, Renault and Volvo. Guyana remains a likely positive driver to demand for machinery and new motor vehicles amidst its pending economic acceleration.

Despite facing a 5.8% contraction in Revenue, Financial Services (12.3% of PBT) saw an 11.6% increase in PBT. The segment may improve with MASSY’s continued digitization of payment services and potential improvement in financial markets. However, potential lower levels of disposable income could present challenges to loan growth and premium payments. Nonetheless, MASSY is likely to continue benefitting from its remittance services, which provides an important source of Foreign Exchange for the group. Strategic and Other Investments, which accounted for 8.8% of PBT – contracted by 17.5%.

At a current price of $62.39, MASSY trades at a trailing P/E of 8.6 times, below the Conglomerate sector average P/E of 13.9 times. The stock offers investors a trailing dividend yield of 4.0%, above the Conglomerate sector average of 1.9%. In addition to expanding its LPG operations in Colombia, MASSY continues to improve its operations in Guyana, a region exposed to ongoing economic development. Through its 10% stake in Caribbean Gas Chemical Limited (CGCL), MASSY stands to generate increasingly valuable foreign exchange. While resilient as a firm, MASSY’s broader operating jurisdictions are likely to confront challenges as regional economies attempt to overcome the lingering effects of the COVID-19 pandemic. On the basis of relatively attractive valuations and improving operations across regional territories but tempered by lingering economic uncertainties, Bourse maintains a NEUTRAL rating on MASSY.

Fast Moving Consumer Goods (FMCG) which accounted for 63.6% of PBT, grew 15.3% while Revenue generated by the segment rose 1.2% YoY. Some product lines under this segment include cleaning and home care items such as Clorox and Pine-Sol as well as food and beverage brands such as Anchor, Peardrax and Swiss.

Pharmaceutical & Health Care, 31.7% of PBT, improved 5.2% YoY, despite reduced demand for its cosmetics and related products and likely normalizing demand of pharmaceutical products, which may have contributed towards the 4.0% YoY decline in the segment’s Revenue. As Trinidad and Tobago embarks on its vaccine distribution program, AGL has outlined its willingness to lend logistics and implementation support.

Industrial, Construction and Holdings, which contributed to 4.7% of PBT, expanded 24.8% in Q1 2021. This may be reflective of improving operational efficiency, given that this segment would have reported a 13.5% YoY decline in Revenue amid reduced business activity and possible losses incurred by AGL’s Rosco Petrovance, due to its exposure to the challenging energy market conditions. 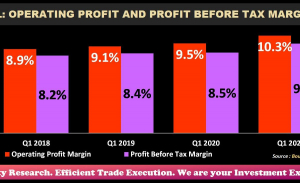 Operating Profit Margin improved to 10.3% in Q1 2021 from 9.3% in Q1 2020, reflecting the Group’s continued efforts to improve its operations, with cost management initiatives. This was translated into its Profit Before Tax Margin which moved to 9.4%, in comparison to a prior 8.5%.

In FY 2020, AGL generated 24% of its Revenue from its Other Countries jurisdiction, which encompasses Guyana, Grenada, St. Vincent and St. Lucia. The construction of 12 warehouse/retail units and development of adjoining “lay down yards” in Guyana, set to be completed by April and September 2021 respectively, could potentially generate rental revenue for its Industrial, Construction and Holdings segment. Supporting this expansion would be Guyana’s home building initiatives, which is geared towards improving its construction sector with 18 housing projects being considered.

AGL is priced at $22.01 and currently trades at a Price to Earnings Ratio of 11.7 times, in comparison to the Trading sector average of 27.5 times. AGL currently offers shareholders a trailing dividend yield of 3.6%, relative to a sector average of 2.5%. With economic uncertainty surrounding the impact of new COVID-19 viral strains, demand for cleaning products and pharmaceuticals may continue to be stable. On the basis of relatively fair valuations and improved margins but tempered by prevailing economic conditions and potential normalization of pandemic-led demand, Bourse maintains a NEUTRAL rating on AGL.