This week, we at Bourse discuss the now-open Additional Public Offering (APO) of TTNGL. In the Mid-year budget review, the Honourable Minister of Finance indicated that The Government of the Republic of Trinidad and Tobago (GORTT) would make an offer for an additional sale of its shareholding in TTNGL, through its nominee, The National Gas Company of Trinidad and Tobago Limited (NGC). A total of 40,248,000 class B shares is being offered to the public at a price of TT$21.00 per share. We review the performance of TTNGL and its investee company – Phoenix Park Gas Processors Ltd (PPGPL) – since its Initial Public Offering in 2015.

The financial performance of TTNGL and its profits available for distribution depends directly on the performance of its sole investee company, Phoenix Park Gas Processors Ltd (PPGPL), of which TTNGL owns 39%. 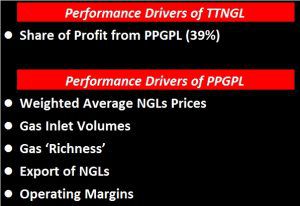 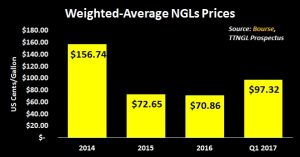 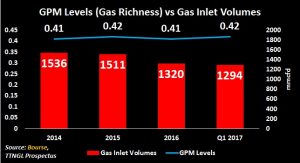 Gas ‘richness’ relates to the content of NGLs present in gas processed. Gallons Per Thousand, or GPM, is a measure of the number of gallons of NGLs extracted per thousand cubic feet of natural gas processed. A lower GPM level means gas is drier (which means there are less NGLs for PPGPL to extract and sell) and vice versa. GPM levels have remained relatively stable since 2014.

(iv) Export of NGLs from PPGPL 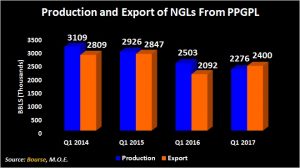 PPGPL’s Gross Profit (GP) and Net Profit (NP) Margins, both measures of profitability, have averaged 41.7% and 21.9% respectively from 2012 to 2016. This reflects relatively stable performance of the company, even in the face of more challenging operating environments in 2015 and 2016. For the first quarter in 2017, the GP Margin was 38.6% while the NP Margin stood at 21.7%. PPGPL has undertaken a rationalization of its expenses, focusing on improving cost efficiencies in its Operating and Administrative expenses. 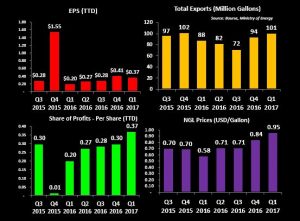 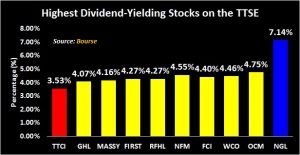 TTNGL reported a position in cash and cash-equivalents $403M as at March 2017, or roughly $2.61 per share. As a holding company with relatively limited cash expenses, this balance could become available for distribution to investors over time. TTNGL earns revenue is USD. As per the Additional Public Offering prospectus, TTNGL ‘may elect from time to time to declare and pay dividends in either TTD or USD.’ 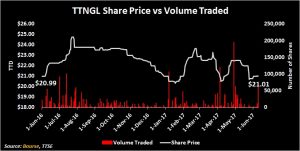 Within the last 12 months, TTNGL traded within a narrow price range from $20.30 to $24.75, at an average of $22.47. The $21.00 offer price falls on the lower end of this 12-month range, and could therefore provide an entry point for investors who have been waiting for such an opportunity.

Investors may recall that Bourse’s rating on TTNGL stock, based on the most recently released results for the quarter ended March 31 2017, was a BUY. This was on the basis of (i) a high trailing dividend yield, (ii) a healthy per-share cash position, (iii) the potential of continued stabilization/recovery of revenues through expected improvements in local energy production and global pricing and (iv) an implicit hedge against the TTD through its USD earnings. Post-announcement of the Additional Public Offering, the BUY rating has been maintained.

As always, investors should consult a trusted and experienced advisor, such as Bourse, to make a more informed investment decision.