This week, we at Bourse review the performance of the local and international equity markets for the first half of 2019. Regionally, the Trinidad and Tobago Composite Index as well as the Cross Listed Index marched ahead. Internationally, equity markets shrugged off potential concerns to post commendable returns. Will the good times last, or could there be a repeat of 2018’s late swoon? We consider some of the factors which could drive equity markets in the second half of the year.

The Trinidad and Tobago Composite Index (TTCI) rose an impressive 7.0% year-to-date (YTD), a marked improvement over the 2.6% decrease recorded for the HY 2018. The increase was attributable to both the All T&T Index and the Cross Listed Index (CLX), which account for 67.0% and 33.0% of total market capitalization respectively. The All T&T Index advanced 5.6% (YTD) while the Cross Listed Index, 9.9% (YTD).

The second quarter of 2019 has been fairly eventful with respect to take-overs and acquisitions. NCB Financial Group Limited (NCBFG) has finally concluded its take-over of a majority shareholding (almost 62%) in Guardian Holdings Limited, a transaction in the works since December 2017. The Sagicor-Alignvest acquisition transaction has also made some noteworthy strides toward completion. With the vast majority of SFC and AQY shareholders giving approval and, most recently, obtaining the required sanctions from the Court of Bermuda, the expected closure of the deal is before the end of 2019, after which SFC will be delisted from the local exchange. Jamaica-based JMMB Group Limited has also entered into a subscription agreement with AQY which, following the completion of the SFC-AQY transaction, will result in the Group owning a 20% shareholding in ‘New Sagicor’. West Indian Tobacco Company Limited (WCO) is also expected to complete its 3-for-1 share split within the second half of 2019.

US Markets Surge Despite Trade Tensions

U.S equity markets, as measured by the S&P 500 Index, climbed an impressive 17.3%, representing its best half-year performance in over a decade. Several factors have fueled the rally, including a decrease in corporate income tax rates, and changes in the US Fed’s interest rate trajectory. 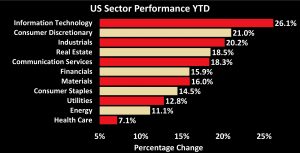 Latin American markets rebounded from a sell-off during the month of May to a year-to-date (YTD) return of 10.2% as at the end of June 2019. Brazil’s equity market (IBOVESPA Index) has recorded significant YTD gains of 16.0% in USD terms. This performance was aided by an appreciation in the Brazilian Real, as well as lower domestic interest rates.  Mexico’s MEXBOL Index remained buoyant during the period, rallying 6.1% YTD in USD terms, despite significant volatility derived from trade tensions with the US and continued economic headwinds. Within Q2 2019, the US threatened to impose tariffs on all Mexican imports in retaliation to the immigrant issue faced, but the imposition was subsequently called off. Credit rating agency, Fitch Ratings Inc., downgraded the Mexico’s sovereign credit rating from BBB+ to BBB, highlighting the underperformance of the economy.

Asian markets advanced 9.6% YTD, as Chinese stocks surged following their worst market performance in a decade for 2018. China’s most recent GDP growth figures in March showed a 6.4% YoY improvement, in line with estimates. Investors are also optimistic about Beijing striking an upcoming trade deal with Washington, which could bring an end to ongoing trade tensions. The CSI 300 rallied 27.3% in USD terms. In India, the re-election of Prime Minister Narendra Modi in May spurred investor confidence, leading to a brief rally. However, the positive prospects derived from this political stability were outweighed by the building fear surrounding the slowdown of economic growth in India’s economy.  India’s Sensex advanced 10.4% in USD terms YTD.

European markets were upbeat for the first half of 2019, propelled by the decision of the European Central Bank to hold interest rates steady until at least the first half of 2020. Uncertainty continues to surround UK’s exit from the European Union with Prime Minister Theresa May resignation following the failure to get her Brexit agreement approved. The EURO STOXX 50 Index advanced 14.8%, driven by the performance of German (DAX: +16.4% in USD terms) and French (CAC 40: +16.1% in USD terms) stocks which cumulatively account for approximately 70% of the geographic allocation of the index.

What’s ahead for international markets?

While investors in stocks would no doubt be celebrating the performance of equity markets at the halfway point of 2019, memories of 2018’s last-quarter crash will be fresh. Looking toward the second half of 2019, some stock market drivers may include: