This week, we at Bourse review the 2018 year-end financial results of two companies within the Conglomerate sector – Ansa McAl Limited (AMCL) and GraceKennedy Limited (GKC). Both companies recorded overall improvements in performance despite adverse economic conditions in their respective main operating jurisdictions. We take a closer look at the results and give a brief outlook.

The Group’s main contributor to PBT (49%), Manufacturing, Packaging & Brewing reported notable PBT growth of 12.2% or $54.3M YoY. This was accompanied by a $52.0M (41.6% YoY) improvement in PBT from the Automotive, Trading and Distribution segment. These gains were offset, however, by a $45.0M or 14.5% reduction in PBT contributions from the Insurance and Financial Services segment. According to AMCL, this decline was attributable to $20M in gross claims in the General Insurance Company (Tatil). Additionally, PBT contributions from the Media, Retail, Services and Parent Company declined 14.0% or $12.5M YoY due to contraction of corporate media spending. AMCL’s performance was adversely affected in FY 2018 by the economic climate and debt restructuring in Barbados, resulting in impairment costs of $42M. Adjusting for these one off expenses, the Group’s overall PBT would have increased 11% YoY, more than double the reported growth of 5.1%.

At a current price of $55.02, AMCL trades at a trailing P/E of 15.5 times, above the Conglomerate sector average of 12.5 times but lower than the stock’s three-year average of 17.4 times. The stock offers investors a trailing dividend yield of 3.3%, in line with the sector average of 3.1%. On the basis of improved earnings and fair valuations, but tempered by subdued economic conditions in AMCL’s primary markets, Bourse maintains a NEUTRAL rating on AMCL. 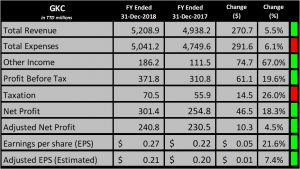 Overall, PBT has displayed a consistent upward trend over the past five financial years. PBT from the Money Services segment (44% of PBT) declined to TT$ 162.7M (4.0% YoY) after steady growth in the previous four years. This was attributable to strengthened compliance measures which temporarily brought down the transaction volumes in the remittance businesses in Jamaica and Trinidad, as well as foreign exchange challenges in currency trading operations in Trinidad. PBT generated from the Food Trading segment (23% of PBT), improved to TT$ 86.0M (6.2% YoY). This stemmed from revenue growth in the Jamaica, USA and Canada operations. The Insurance segment recorded a TT$ 5.4M (18.9%) improvement in contribution to PBT, largely due to the offering of digital insurance through GKOnline, compounded by a reduction in claims YoY. Despite a 3.7% decrease in revenue in the Banking and Investment segment from a reduction in the loan portfolio, its PBT contribution increased by 11.2%. The Group added three mini branches of First Global Bank (FGB) in 2018 and continues to heighten operational efficiency through initiatives such as its loan automation system for retail loans.

Jamaica remains GKC’s main jurisdiction and Revenue has shown steady growth over the past four years, contributing 53% of Total Revenue in 2018. North American revenue continued to increase YoY, proving beneficial to the Group by providing revenue generation in ‘hard’ currency. Caribbean and Other exposures have remained relatively constant while European exposure has declined consistently.

At a current price of $3.25, GKC trades at a trailing P/E of 12.1 times, in line with the Conglomerate sector average of 12.5 times and its 3-year average of 12.2 times. Estimated adjusted trailing P/E would have been 15.5. GKC offers investors a trailing dividend yield of 2.1%, below the sector average of 3.2%. On the basis of continued revenue growth and US dollar dividend payments, but tempered by relatively fair valuations and a low trailing dividend yield, Bourse maintains a NEUTRAL rating on GKC.