This week, we at Bourse review the financial performance of Sagicor Financial Corporation (SFC) and Trinidad and Tobago NGL Limited (NGL) for their first quarters ended 31st March, 2019. While SFC’s earnings were weaker, progress on the Alignvest acquisition promises to provide additional value to Sagicor shareholders. Meanwhile, investors’ reactions to a possible shutdown of Atlantic LNG Company of Trinidad & Tobago’s (ALNG) Train 1 has sent the price of NGL shares lower over the past two weeks.

SFC’s Total Q1 Revenue has trended upward since 2016, with the most notable shift (+79.7%) occurring in Q1 2019. This was mainly attributable to a jump in Net Premium Revenue from TT$1.26B to TT$2.44B (+94.9%) stemming from significant expansion in SFC’s USA operations. The Group’s strategic decision to stop reinsurance of premiums to third parties, thereby retaining 100% of production would have also contributed to this net improvement. However, SFC would now have bear the full downside risk which would have previously been mitigated through reinsurance.  Net Investment and Other Income also experienced YoY growth of 52.4% from TT$696.7 to TT$1.06B. 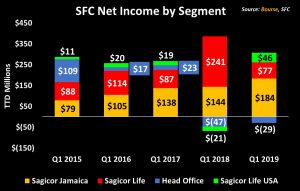 Alignvest (AQY) shareholders gave the green light on May 23rd, 2019 to the ‘acquisition’ of SFC, having received a majority (92%) shareholder approval and meeting the minimum cash requirement for the transaction. Of particular interest was the subscription agreement between AQY and JMMB Group Limited (JMMB), whereby JMMB would acquire a 20% shareholding in the new “Sagicor Financial Company Limited”. With the SFC Scheme of Arrangement Meeting fast approaching on 4th June, 2019, shareholders should be mindful of some important upcoming deadline dates. Proxy forms should be submitted by Friday 31st May, 2019 for shareholders on record as at 18th April 2019, while Election Consideration forms should be submitted by 11th June, 2019, following the Scheme meeting. These forms can be readily accessed either on the SFC website or at www.remotestores.com.

The main driver of the downturn in NGL’s performance was a 25.7% reduction in the Share of Profit from Phoenix Park Gas Processors Limited (PPGPL), from $61.4M in Q1 2018 to $45.6M in Q1 2019. PPGPL derives its revenue from the processing of “wet” gas to NGLs and the fractionation of such NGLs to produce Propane, Butane and Natural Gasoline, which are then marketed and sold to domestic and international users. Average Mont Belvieu Prices of these commodities for Q1 2019 fell YoY by 19.5% 10.9% and 22.3% respectively. The effect on Revenue was tempered, however, due to 7.5% higher NGL sales volume YoY. Overall, Profit for the Period declined 26.0% from $61.8M to $45.8M. 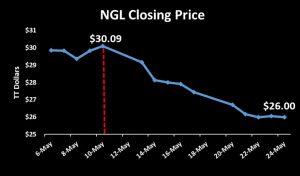 Since its 2015 Initial Public Offering (IPO), most investors in TTNGL have become accustomed to the stock’s dividend stability, despite the cyclical nature of the energy industry. However, BP Trinidad & Tobago’s (BPTT) announcement that disappointing results from its drilling programmes could impact its forecast production in T&T (in particular for 2020 and 2021) has rattled shareholders of TTNGL. BPTT also noted that there could be “challenges” to its supply of gas to Atlantic LNG’s Train 1 after 2019.

The big question: Is the market response to the news warranted, or is it an overreaction? A more detailed look at the impact of a possible shutdown of ALNG’s Train 1 on NGL’s fortune is available in an exclusive Research Note on the Bourse website, www.remotestores.com.

At a current price of $26.00, NGL trades at a trailing P/E of 17.0 times, and remains one of the top five dividend paying stocks on the local exchange, offering investors a trailing dividend yield of 5.8%. NGL also maintained a healthy cash position of $2.86 per share as at 31st March, 2019. As explained in our Research Note (available at www.remotestores.com), several factors should be considered in assessing the potential impact of a Train 1 shutdown on NGL’s performance. Accordingly, Bourse maintains a BUY rating on NGL.