JMMB Group Limited (JMMBGL) recently launched an Additional Public Offering (APO) of shares concurrently in both the Trinidad and Tobago and Jamaica. The issue is currently sized at 266,737,797 ordinary shares, with JMMBGL reserving the right to increase this issue to a maximum of 325M shares. Within this issue, 150M shares will be reserved for key investors, 80M shares for existing shareholders and team member while, the remaining 36.7M shares (95M shares if JMMBGL decides to increase its offer to the maximum) will be available to general investors.

The proceeds of the offer are intended to be used by JMMBGL for the expansion and diversification of the company, through avenues such as the funding of a 22.2% stake in “New Sagicor” for US$250M, subject to the completion of Sagicor’s acquisition by Alignvest Acquisition II Corporation.

The invitation was opened to investors from 9AM on 22nd October and will be closed at 4PM (3PM in Jamaica) on 11th November, 2019, however the issuer reserves the right to close the offer earlier. The basis of allocation of new shares is expected to be announced by 14th November, 2019 while the allotment of shares can be expected by 25th November, 2019.

With news of this release and in order to help investors to make the most informed decision, we at Bourse take a closer look at:

JMMBGL currently has a market capitalization of TT$3.26B and is the second smallest company listed in the Non-Banking Finance Sector of the Composite Index. Should subscriptions of the APO meet the target, and the number of issued shares increase by 16.4%-19.9%, the commensurate increase in market capitalization (all else being held constant) could bolster JMMBGL to being the second largest Non-Banking Finance institution on the local exchange. 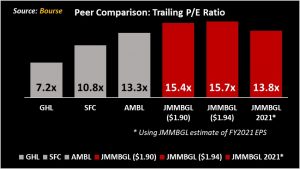 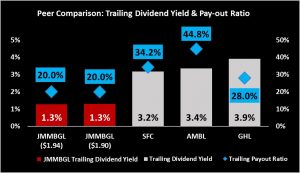 JMMBGL currently has a trailing dividend yield which is lagging behind its sector peers, a consequence of its low dividend pay-out ratio and price appreciation. JMMBGL has undertaken a strategy which is actively aimed at expanding and diversifying through acquisitions and the addition of new business lines. Therefore, a larger portion of funds are reinvested into the business with the likely aim of maximising shareholder wealth in the long term.

Over the past three years JMMBGL’s share price would have experienced some volatility facing upward and downward shifts in price, trading at an average price of $1.65. However, over the course of the last six months JMMBGL shares traded at an average price of $2.12, appreciating to a high of $2.50 on the announcement of the entity’s intention to purchase a 22.2% stake in Sagicor. Subsequent to the announcement of the JMMBGL’s APO, the share price would have retreated somewhat, likely because investors expected the shares to be offered at a substantial discount to the then traded price of the stock. 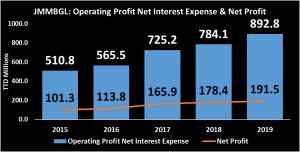 JMMBGL has recorded continued growth over the past five years, as both its Operating Revenue Net of Interest Income and Net Profit have maintained an upward trend. At the end of FY2019, JMMBGL reported a 13.7% or TTD$108.7M increase in Operating Revenue, as compared to that of FY2018. The Group benefited from a reported rise in Income from Foreign Exchange Trading, Fees Earned from Managed Funds and Fees and Commissions, with each segment seeing increases of TTD$52M (78% YoY), TTD$22M (65% YoY) and TTD$11.8M (20% YoY) respectively. JMMBGL would have also benefited from an uptick in its banking segment as evidenced by Net Interest Income which grew TTD$53M (14.18%) in FY2019 compared to FY2018.

Over a 5 Year Period JMMBGL’s Operating Revenue Net Interest Expense would have grown at a Compounded Annual Growth Rate(CAGR) of 11.81% while its Net Profit have grown at a 5 Year CAGR of 13.58%. 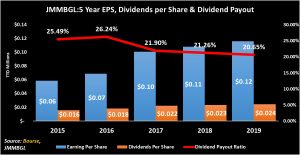 JMMBGL currently has a 5-year average dividend payout ratio of 22.8%. The company is projecting a 20.2% or TTD$0.025 increase to its Earnings Per Share going forward contingent on JMMGBL’s acquisition of a 22.2% stake in New Sagicor. Additionally, JMMBGL would have recently introduced a commercial banking arm in Jamaica and launched loan provision entity JMMB Express Finance. These initiatives are in keeping with JMMBGL strategy of expansion and regional diversification, factors that are likely to drive longer term profit growth.

The question that would now be on the minds of investors is whether the JMMBGL APO presents a good opportunity. The Jamaican market has offered investors staggering return in recent times, however the growth in the Trinidadian market has not been nearly as significant. As a result, the issue price may seem a bit frothy in contrast to the historical traded price of JMMBGL. Nevertheless, the opportunities presented by the JMMBGL APO do seem quite promising and investors should consider that: