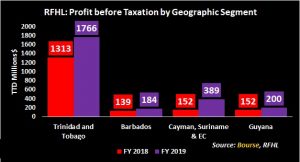 From the 2018 to 2019 period, RFHL’s Profit before Tax (PBT) improved across all geographic segments, with Trinidad and Tobago operations continuing to contribute the largest portion of PBT. The group experienced a 53.75% YoY increase in PBT from the Cayman Islands, Suriname and the Eastern Caribbean Islands and an approximate 32% YoY increase in PBT from both Barbados and Guyana.

The acquisition of Cayman National Bank (CNC) bolstered RFHL’s profit contributing $92.6 million to profits (after minority interest) for the seven-month period under RFHL ownership. In the coming year, CNC’s operations in addition to the acquisition of Scotiabank’s operations in St. Marteen, and the Eastern Caribbean countries (which was completed on November 1st, 2019) are expected to increase the group’s overseas’ operations, strengthen its regional presence and improve overall profitability. According to the Chairman’s Comments, the Scotiabank acquisition is set to contribute $10B to total asset size and $133.6M to net profits on a pro-forma basis. 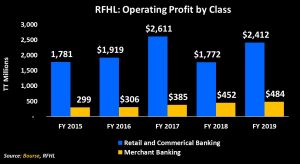 Two main one-off items contributed to the net impact of an increase in profits for RFHL by $83.5M. In Trinidad and Tobago, the group amended the terms of the post-retirement medical benefits plan to be in line with the market, allowing for a write-back to net profits after tax of $275.3M. Also, the Barbados’ corporation tax rate was slashed from 30% to a range between 1% and 5%, resulting in a charge to the income statement of $191.8M owing to the re-measurement of deferred tax assets at the lower rate. Overall, excluding the impact of these items, the group recorded a core profit of $1.50 billion, a gain of $174.8 million or 13.2% higher than the 2018 period. 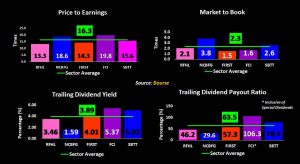 At a current price of $130.00, RFHL is trading at a Price to Earnings ratio of 13.3 times, below the Banking sector’s average of 16.3 times. The stock also offers a Trailing Dividend Yield of 3.46%, just shy of the sector’s average of 3.89%. On the basis of consistent core revenue expansion, growth potential from acquisitions, attractive valuations and a fair dividend yield, Bourse maintains a BUY rating on RFHL.

Trading of Sagicor shares was suspended on the Trinidad and Tobago Stock Exchange on November 26th, 2019. Directors of the company have fixed the period 4th-17th December to determine the shareholders entitled to receive the Scheme of Arrangement consideration. Legal transfer of all shares of Sagicor held by shareholders will occur on and as of December 6th, 2019. Sagicor shareholders who previously elected to receive cash for some or all of their holdings, up to 10,000 shares, will be mailed cheques on or about December 17th, 2019.

Shareholders who opted to receive ‘New Sagicor’ shares after the Arrangement is completed will be mailed a Direct Registration System(DRS) statement within 30 days of closing. This statement will detail the number of shares owned in the new entity. 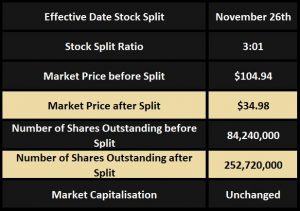 West Indian Tobacco Company Limited’s (WITCO) long awaited 3-for-1 stock split has been finalised resulting in a change in both the company’s share price and number of shares outstanding. Based on the 3:1 stock split WITCO’s share price moved from $104.94 to $34.98 on November 26th. The number of shares outstanding tripled from 84.24M to 252.72M. WITCO’s decision to undertake this stock split was based on the aim of improving the stock’s liquidity on the local stock exchange and expanding prospects for capital appreciation.